I like to build things from corrugated cardboard boxes.

It’s an abundant material that is usually free; it’s easy to work with; it works perfectly with a hot glue gun; it’s simple to dispose of without any guilt when your creation isn’t useful any longer.

Learn how to cut corrugated cardboard with the Cricut Maker Knife Blade, and use the pressure settings in Design Space with easy step-by-step instructions.

When I bought my Cricut Maker, the knife blade wasn’t released yet. Design Space has a cardboard setting for the standard fine-point blade, so I tried to make it work. I couldn’t get it to cut all the way through the cardboard, even after the machine cut the maximum number of times. #fail

The deep-cut blade was supposed to be for thicker materials. I bought it… but it tore the edges of every cut. #fail

Cricut released the knife blade, and after some trial and error, we had a #win!

I couldn’t find any information on how to cut corrugated cardboard with the Cricut Maker Knife Blade, so I’m sharing the results of many (failed) trials with the fine-point blade and deep-cut blade with you.

You’ll become an expert at finding the right pressure settings in Design Space and performing test cuts for your Cricut Maker too!

These instructions and pressure settings are all for the Cricut Maker. Cricut does list settings for other machines on their site; however, I think the cardboard they mean is thin craft cardboard and not from sturdy boxes like I’m using.

It seems that the newer the cardboard is, the better it cuts. I have a pile of “good” boxes I saved, but they don’t seem to cut as well as new boxes.

If it’s a very large box, it will be too thick to cut. A very sturdy box might not work either. If it has double layers of corrugation, as shown below, the Cricut Maker won’t cut it.

You also want to have a sharp Knife Blade. They do last quite a long time, especially if you clean/sharpen it.

Question: How do I sharpen the Cricut Maker Knife Blade?

Answer: You can use a ball of aluminum foil. Jab the knife blade into the ball around 50 times; tilt the blade so that it goes in at different angles. I didn’t think this would work, so I didn’t bother to take “before” and “after” photos… but it actually worked very well. My box cut much more smoothly after I did this!

1) Choose your cardboard. Most likely, you have a supply of cardboard boxes. (From Amazon Prime or grocery delivery, perhaps?) It’s going to be easiest in the long run if your cardboard is all the same because the thickness won’t vary. If you use a different type of cardboard, you will need to test the cut pressure and multi-cut settings again.

2) Cut your cardboard down to a size that fits your mat. Cricut recommends the material size be less than 11 inches wide.

3) Make a simple shape using Design Space for your test cut, such as a square or triangle. Use something with corners; the corners are a good test to be sure it cut all the way through the material.

4) Tape the cardboard to the center of your purple StrongGrip mat. (Hint: A green mat will also work for a light material like cardboard, especially if you tape it down!)

5) Slide the white roller wheels to the sides so they don’t run over the cardboard. (If you’ve never moved them, they may seem stuck. Use more pressure – you won’t break them.)

6) Insert the Cricut Knife Blade in slot B. It should look just like the image below.

7) In Design Space, press the green “Make It” button. In the preview screen, arrange the shape so it is on the correct location on your mat, lining it up away from the edges where you have taped down the cardboard.

8) Click the Continue button and select your material. Try the “Matboard 1.5mm” option first. For my cardboard, this setting is perfect. It cuts through cleanly and does not cut into the mat.

9) Load the mat and press the “Go!” button. You’ll see a message about it having a longer cut time than normal. When it’s finished cutting (or whenever you choose to stop it), unload the mat, remove the tape and check if the cardboard was cut correctly.

Warning: You might want to stop the cut after a few passes instead of the full amount, just to check it. You don’t want to cut into your mat. This is the test cut, so start out carefully.

Did it cut through without cutting into the mat?

If it cut entirely through the material – great! Write down that setting or number of cuts for future reference.

Did it NOT cut entirely through the cardboard?

This is what is most likely to happen on the first try. No problem – we’ll try again.

Retape down the material. Move the test shape to a different stop on the mat (on the preview screen.)

Did you stop the cut early? If so, let it continue to cut one or two more passes before you stop it.

If it cut the full number of passes, try choosing the “more pressure” option.

If it still didn’t cut through the cardboard, choose another material setting. Try the “Chipboard” setting. This uses more pressure and 24 multi-cut passes, so stop the cut after 10 passes and check it. Continue to check it every few passes.

If that setting wasn’t successful, keep adding a pass or two until you get a clean cut through the material.

When you have a successful cut, write down that setting or number of cuts for future reference.

Did it cut through the cardboard and also left a deep cut on your mat?

There was too much pressure or too many passes.

Try a different setting. The “Tooling Leather – 1.6 mm” setting might be a better one. It has both less pressure and fewer passes.

If it cut well, but left a small mark on the mat, you might just try the “less pressure” option or press the “Pause” button on the machine before it finishes all of the multi-cuts (after six passes instead of the full eight, for example.)

This wasn’t enough to cut through my cardboard, but it might be enough for yours. Go ahead and try it!

Note: You can NOT create any custom material settings with the Knife Blade. You just need to choose a material already listed and perform tests to see if it will work. You can stop the cut early, or cut another time after it’s finished if you don’t unload the mat.

Save this tutorial for later by pinning on Pinterest!

I have several cardboard projects I’m designing, such as the hexagon pencil holders below, a doll house and furniture, gift boxes, and more! Sign up using the form below to be notified when the SVGs and tutorials are posted. 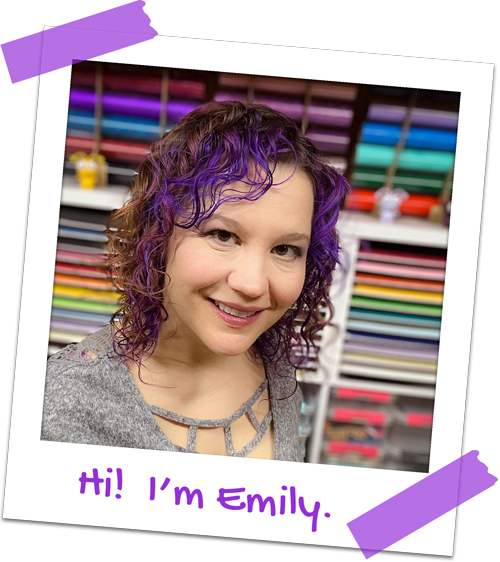